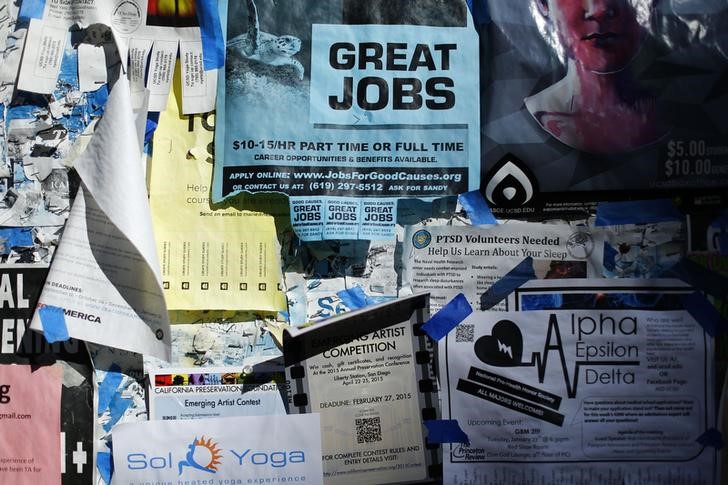 Investing.com — The U.S. created 428,000 in April – more than expected – bringing the labor force back ever closer to its pre-pandemic level.

The Labor Department said that the stayed at 3.6% of the workforce, disappointing forecasts for a drop to 3.5%, while there were also tentative signs of wage pressures starting to ease. rose only 0.3% on the month, a tick less than forecast. In annual terms, continued to grow at a clip of 5.5%, unchanged from March.

Ian Shepherdson, chief economist with Pantheon Macroeconomics, said the “relative softness” of wage growth “has now persisted for three months, and it’s starting to look like a trend.”

He pointed out that the three-month annualized rate of increase of average hourly earnings now stands at just 3.7%, the lowest since March 2021.

Even so, the numbers suggest a much stronger dynamic than was evident in ADP’s monthly survey of private-sector hiring on Wednesday. Manufacturing employment, in particular, posted its biggest gain since September 2020, rising by 55,000. By contrast, construction employment gains dwindled to only 2,000, possibly a sign that higher interest rates are already affecting the debt-intensive industry. In addition, hiring cooled in the leisure and entertainment sector, with a gain of only 78,000 after several months of adding more than 100,000.

“Another strong month for the job market, but job growth appears to be moderating,” said Mark Zandi, chief economist with Moody’s Analytics, via Twitter. “This is a feature and not a bug. Job gains must slow as the economy is fast closing in on full-employment.”

“To avoid overheating, monthly job gains must slow to near 100,000 by year’s end,” Zandi added.

However, the numbers also indicated fresh problems with discouraged workers, those who have chosen to withdraw from the workforce for various reasons. The fell to 62.2% of the working-age population, breaking a sequence of three straight increases. As the economy reopened over the previous six months, the rapid rise in wages and the depletion of pandemic-era savings had enticed many discouraged workers back into the labor force.

The drop in participation was particularly marked in workers over 55 years old.

Financial markets were unsure what to make of the report initially, with both stock futures and bond yields reversing their initial moves within 20 minutes of the news release.